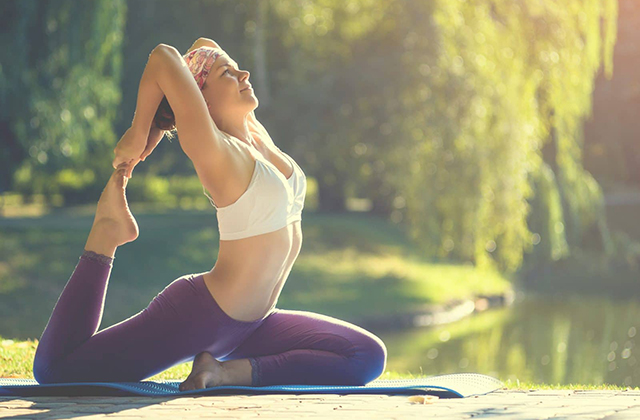 In order to get the yoga benefits all you need is a good Pilates instructor course. According to the most recent survey, the vast majority of participants in yoga classes were women (approximately 77 percent), despite the fact that some of the most popular and famous teachers today and many of the originators of the practice are and were men.

So where are the men in the studio?  That is a question that many yoga instructors and studios are trying to answer as they try to reach out to a market that, for all intents and purposes, remains relatively untapped.

There are many possible reasons why men stay away from the yoga studio, but a few reasons seem to stick out more than others.  Many experts and yoga enthusiasts point to the competitive nature in men and the belief that many men don’t find yoga challenging enough for the physical goals they wish to accomplish.  Plainly stated, many men don’t find yoga “masculine” enough for them (as if a pose like the Side Crane is a piece of cake).

According to a few instructors, quoted in a recent article, men enter the yoga studios and see a room full of women, perhaps hear calming music and notice there’s not one piece of heavy metal equipment in the room and conclude that this place is not for them.  And if there is a male instructor, his calm, sensitive demeanor is in sharp contract to the “feel the burn” approach of a personal trainer he may be used to.  One yoga instructor said that men come to the studio looking for a challenge immediately.

Experts point to a number of possible reasons why mainstream men consider yoga a “women’s thing”, starting with Indra Devi, a female yoga instructor who came to the U.S. in the 1940s and was promoted by cosmetic legend Elizabeth Arden.  Some time after, Richard Hitttleman became a yoga celebrity, but his books and television show only featured female models.  The PBS network presented “Lilias, Yoga and You” in the 1970s and featured instructor Lilias Folan in an afternoon broadcast that seemed perfectly tailored for the stay-at-home mom of that era.  Although more athletic forms of yoga developed later, such as Power Yoga, the deep involvement of woman in the practice solidified the idea of yoga as a woman’s exercise in the minds of many men.

Yoga experts also say the need for men to have concrete exercise results may also be a reason why they refrain from yoga.  With weight lifting or weight training, a man may see an increase in muscle mass – a bigger bicep or a bit of definition here or there.  But with yoga, many of the most important changes are internal, mental and emotional benefits that maybe harder to gauge for a person taught to measure success by wins and losses.

As one instructor stated, instead of focusing on quieting his mind or relaxing, men may build even more tension by focusing on performing a pose perfectly (in response to their competitive streak) and not be satisfied until they do, even if it’s a move recommended for an advanced student and they’re in their first class.  By putting their efforts into perfection, many men completely miss one of the real benefits of the practice.

Finally, several yoga experts and instructors point to men’s fear of failure as one of the reasons they shun yoga in such large numbers.  Since most men’s idea of exercise consists of lifting weights or calisthenics that require the body to move in such a rigid motion, they often lack the flexibility that yoga demands.  Even beginning male students, the experts say, give up after a few sessions because they fear “failure” at not being able to perform the moves (without realizing that their inflexibility may be the biggest reason they should participate in yoga).

Yoga instructors say it may help to inform many men that some of today’s top athletic stars are yoga fans who use the practice to help them perform.  Superstars such as NBA star Shaquille O’Neal, former NFL star Jon Kitna and pitcher Barry Zito, as well as entire teams such as the Los Angeles Lakers and Chicago Cubs, offer yoga to their athletes to counteract the rough treatment they receive on the field.

Men who attend yoga classes must let down their defenses and not think of yoga in terms of success and failure.  The instructors say that yoga is not concerned with perfection of pose or rating someone based on whether they can perform a backbend on their first day in class.  Yoga, they stress, is a gradual process where the student comes to acknowledge the mind-body connection.  When placed in the right perspective with realistic goals, each yoga session can be considered a “success”.

Yoga instructors suggest that men who are attending their first yoga session take time to introduce themselves to the teacher and discuss the class structure.  Men should also accept and admit (to the instructor and to themselves) that they harbor some anxiety about the yoga class.  By establishing lines of communication, the student and the instructor can begin to erase the fears they have about not being up to the task of yoga.

Another option yoga instructors may want to consider, the experts say, is occasionally conducting a men’s-only yoga session where men can be themselves.  Instructors who have held classes such as this admit that it creates a different atmosphere than usual and that the typical male joking is not uncommon.  But arranging such classes can be a big help in teaching men to relax in the studio and, in turn, relax with the idea of yoga.

Finally, men should be willing to let themselves go mentally in a yoga class.  Some of the most powerful men in business have credited yoga with letting them clear their heads of the day-to-day stresses and mental strain of the workday.  And not only does yoga let them get rid of old, troublesome thoughts, it allows new thoughts to come in.  indeed, many top executives have claimed that some of their most successful ideas have come while meditating during yoga.

It may take a while until more men embrace yoga the way women have.  But by adopting this attitude, men too can begin to understand the benefits of yoga, both mental and physical.

Lindaa Adams loves all things that have to do with health.

One of the top health blogs Lindaa has found is Kamloops Yoga Teachers, which is a distinctive combination of yoga and health. For more information, you may also visit Kamloops Yoga Fitness Boot Camp