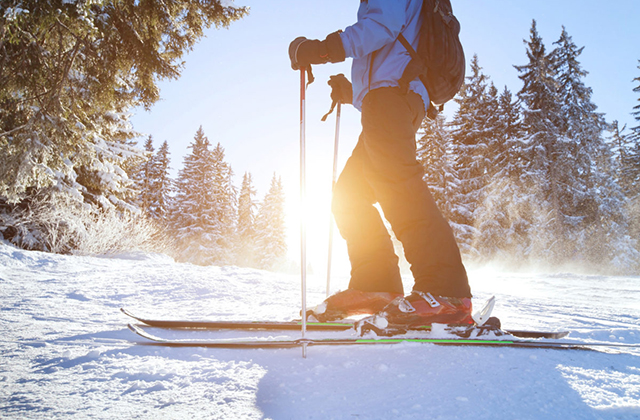 Canada is the pinnacle winter wonderland location, with so many incredible places to hit the slopes and go ski Canada. Shin bang and shin bite can turn an exciting day on the slopes into an uncomfortable experience. The rubbing caused by poorly fitted ski boots can make the skin on your calves, feet, and ankles raw from abrasion, which is exacerbated by the perspiration built up from intense activity. The skiers who are often most prone to sore calves are casual skiers, because they’ll likely be using poorly fitted rental boots instead of owning their own. Luckily, both boot issues are preventable.

Identifying the type of soreness you’re prone to is the first step toward finding a solution. The most common types of soreness are known as shin bang and shin bite. Shin bang occurs when the tongue of the boot repeatedly hits the front of your calf and can manifest as a sharp pain in a small area in the lower part of your tibia. Shin bite is abrasion-related and is caused by the rubbing of a poorly fitted boot.

Sore calves are generally caused by abrasion or repeated impact during your descent. Skiing straight down the fall line quickly builds up an unreasonable amount of speed, so skiers traverse back and forth along the cliff face to control their rate of descent. Turning so frequently causes a lot of rubbing on your calves, because descending at an angle causes your calves to press up against the sides of your ski boot. The abrasion caused by the ski boot gets a lot worse if you’ve got moisture in your boot from perspiration or snow, or if you’re wearing a poorly fitted boot.

The easiest way to address shin bang and shin bite is to prevent either from occurring in the first place. Properly fitted boots are the best solution, because they’ll allow less movement during your run. Have a professional in a ski shop measure your foot to determine the best size, and try on several pairs until you get the proper width and length. Ski boots are only manufactured in whole sizes; half sizes are compensated for with a liner. You’ll need to try on a few pairs to find one that gets closest to your actual size. Tucking a silicone or neoprene pad underneath the tongue of your boot before you lace up is the best way to address shin bang, although a well-fitted boot may be all you need.

Perspiration or snow in your ski boot can cause uncomfortably raw skin faster, because your skin naturally becomes slightly macerated when wet. A wool or synthetic ski sock instead of a cotton ski sock can go a long way, because these materials are hydrophobic and dry much faster. Wearing a thin liner sock underneath your thicker boot sock also gives you a defense against abrasion, because the socks can rub over each other instead of your skin.